Connecting cities for a resilient future

The world has recently seen extreme climate events and natural disasters, occurring simultaneously in various countries. In light of an urgent need to design new adaptation and resilience pathways, the European Urban Resilience Forum (EURESFO) will gather experts, cities and stakeholders to discuss the EU Adaptation Strategy. The event will take place in Malmö, Sweden, and online on 19 and 20 October.

Some of the topics of this edition's programme are: 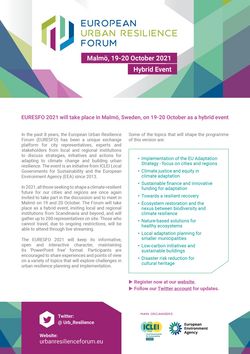 MCR2030 is built upon the success of the previous decade of advocacy work under the Making Cities Resilient (MCR) Campaign which was launched in 2010 and concluded at the end of 2020. The MCR Campaign, led by the United Nations Office for Disaster Risk Reduction (UNDRR) and delivered with partners, achieved considerable success in promoting urban disaster resilience through local government authorities. It advocated the need to reduce risk and develop urban resilience through analysis and action plans, raised cities’ awareness and understanding of systemic issues and their connectedness, and through this process built local capacity and created or strengthened stakeholder partnerships.

The MCR Campaign promoted the use of a 10-point checklist (the Ten Essentials for Making Cities Resilient) to guide city governments in resilience planning and decision making. Over 4,360 cities signed up to the MCR Campaign during the past decade and adopted the Ten Essentials for Making Cities Resilient. Cities that joined the MCR Campaign have made greater progress in reducing disaster risk than cities that have not gone through a similar process of disaster risk awareness.

Moving beyond 2020 into a Decade of Action, cities are in need for more guidance and capacity development in many technical areas ranging from awareness and strategic planning to effective implementation of risk-informed urban development plans. Campaign partners and cities have asked for a follow-up programme that moves beyond advocacy and awareness raising to support cities to assess their resilience status, accelerate the development of local DRR strategies (in response to Target (e) of the Sendai Framework), integrate DRR with climate change adaptation and sustainable development, and then implement those strategies with support from local, regional and global partners.

MCR2030 is a place where cities can find guidance and support to enhance understanding on risk reduction and resilience, to improve strategic planning to reduce risk and build resilience, and to take actions and progress along the resilience roadmap. All cities and local governments are highly encouraged to sign up as MCR2030 member cities. Any national government, national association of municipality, development agency, NGO/CSO, academia and research institution, private sector, UN entity or organization, network or interested entity with specific knowledge and expertise that can support cities to progress along the resilience roadmap are encouraged to join and support local governments in making cities resilient.